I hope that Kyle's gorgeous art and the one thousand words of Florealia managed to convey a sense of beauty, mystery, and slight uneasiness.

This creation diary is the first of a short series in which I explore how the game came to be.

The game is about an encounter with the divine, and I wanted this unspecified godlike figure and her domain to be breathtaking.

I was toying with several ideas at the beginning; to know which ones to keep and which ones to discard, I used two AI art generators, Hotpot.ai and Nightcafé. My goal after fiddling with them was to have a solid reference for the artist, something that would inform mood, palette and themes while still allowing for original interpretations. 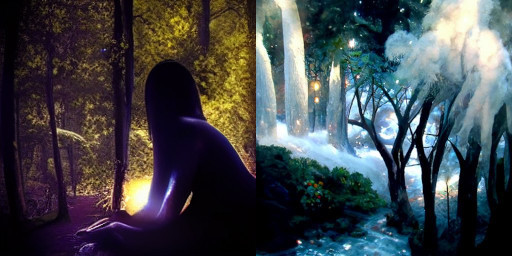 The first decent-looking concept of a lone goddess managed to convey a sense of mystery and uneasiness, but it also felt dull. It didn't express any sense of the divine.

After a few more unsuccessful experiments, I realized that instead of working on the goddess and her domain at the same time, I had to pick one, and chose to focus on the latter.

The second example is still a forest, but the dreamier, pastel palette makes it feel wow. I still like it quite a lot!
What really caught my eye was the water forming a peaceful little stream, or turning into wild foam in the background. 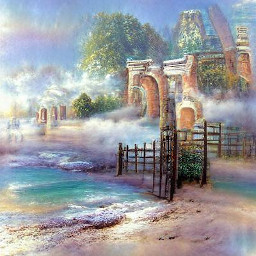 This is the best looking iteration of my experiments with waterscapes. Getting there!

Once I had a decent reference for her watery domain, I started working on the goddess herself. 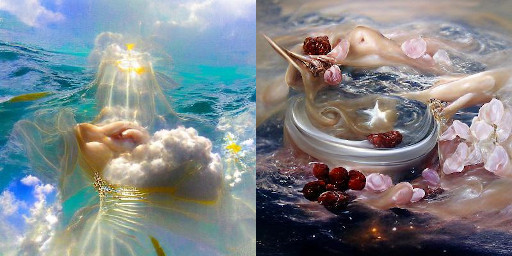 Despite looking like a garbled mess of limbs, these images had isolated elements that I found interesting: the crystalline waves of the first image, the petals of the second. The ideas of petals in the water was really appealing and worth exploring. 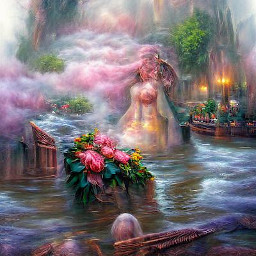 It turns out that when you have a better direction, you input clearer keywords, and in turn the AI processes art that is much more pleasing to the eye. This is the final concept art that I ended up showing Kyle. It's solemn, dreamy, with a figure that is vaguely human in shape.
Now, to make that unsettling! 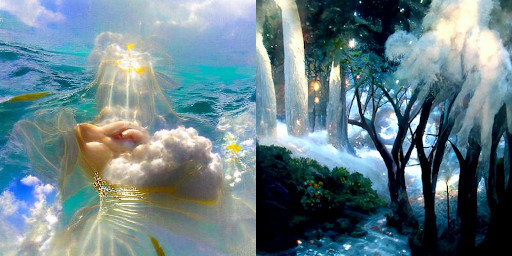 These are the two AI-generated images that ended up being the biggest influences on the game's divine realm: the first is set in a vast waterscape of empty, crystalline waters; the second is made magical by the many sparkling lights.

Here you can see the original image I picked and the post-processing applied to it to make it look 'divine'. I wanted the lights to have a design, a purpose behind them, so I used pictures of galaxies to convey that ethereal feel.

I hope you liked this glimpse behind the scenes. See you in the next creation diary!

The divine is human in shape, but not in thoughts.